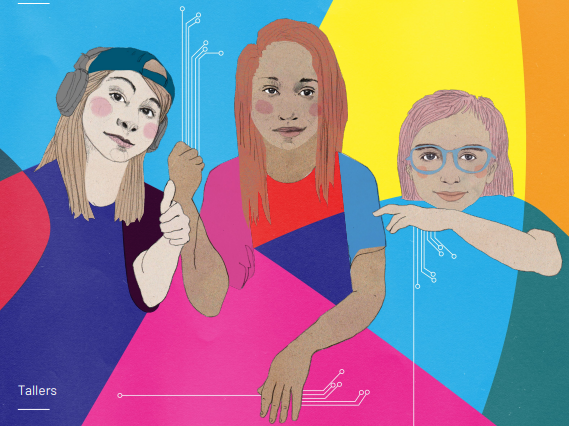 A female look at technology

When we talk about single-sex education, we often think of schools that choose to personalize learning according to gender (boys and girls) but there are many other initiatives that also opt for this organizational variant. We see it in sports and in this article, applied to technology to overcome the inequalities that in this field still exist between the two sexes. Let's have a look at this initiative in Barcelone.

This article was first published in El diari de l'educació on October 28, 2020.

More and more children are born fully digitized: they communicate with screens, learn online, study online, think, train and build in a digital world. And now even more, after a pandemic that has made the presence lose weight. There is an app for everything and a device to control them all. Thus, in such a widespread and widely accepted digital culture, we need to ask ourselves what role we play in it, what role it has been given to us, and what is expected of us. And what images  are reproduced in the digital world.

And in the field of technology, still 50% of its users are women, that’s not equal. This is the opinion of the artists Lucía Egaña and Valeria Linera, members of the Cooptècniques cooperative, which has promoted the Popular School of Technology and Creativity for girls. This is a five-session course designed for girls aged 10 to 13 to address the relationship between gender and technology. "We consider it urgent to review the culturization of gender in new technologies from a feminist perspective, to see how it affects relationships between people," says Linera, coordinator of the School.

The course focuses on girls of a certain age because it challenges this generation that was already born digitized. "The trainers had to learn technologies as something new and we can act as a hinge between young people and the digital world," says Egaña. And it is that this vital stage is characterized for being the moment in which the young people define themselves, often of the hand of the relation and the emotional entailment. And here, today, technologies play a key role, which “are used on a daily basis and are closely linked to self-representation. That's why it's so important to imbue them with feminist perspectives."

The workshops, which take place every Saturday from October 17th to November 14th, address the relationship between women and technology, with an emphasis on intersectional feminism. This is to incorporate the ecological and anti-racist view into feminism. Thus, the debate on the extractivist practices behind the production of technology or the racist discourses that proliferate in the media or networks is raised.

Cooptècniques says that the representation of women in new technologies is “filtered from the global north. We are committed to a diverse participation, with different contents", Linera points out. For example, in one of the workshops, focused on ‘interaction with the voice’, we will work on the representation of women in new technologies by analyzing the voice of machines such as Siri or Alexa.

Basic training all around the city

Workshops range from critical analysis to programming or the study of prototypes and hardware. Each class is different, taught by a different specialist and also in a different space. La Raposa, La Lleialtat Santsenca, Fuga, tictac and Can Batlló have been the spaces chosen to house the Escola Popular. "They are all social or neighborhood spaces, with feminist, pedagogical or anti-racist projects," says Linera. For Cooptècniques, it is important for participants to take a tour of their city and “get to know committed spaces”.

An idea that is also at the base of the School: and is that from the beginning it was also decided that the participants would be diverse. Because places were limited, some were reserved for racialized girls, as "equal speeches in technology, and in any field, benefit a certain type of woman, who is generally white," says Egaña. Also, to look for diversity, the workshops are free, which "guarantees that there can be from girls who do not have a computer at home, to girls who have a smartwatch for themselves," they say.

This is the first edition of the Popular School of Technology and Creativity for Girls, although it has been prepared for almost two years. Finally, it has ended up materializing in a five-session workshop -which has been funded by Barcelona City Council-, although the will of Cooptècniques is that it ends up becoming a course of many more sessions and with more capacity. "These are projects that are slow, but we pursue the same as many families, groups or institutions: to fully de-patriarchalize new technologies and make them safe spaces," says Lucía Egaña.