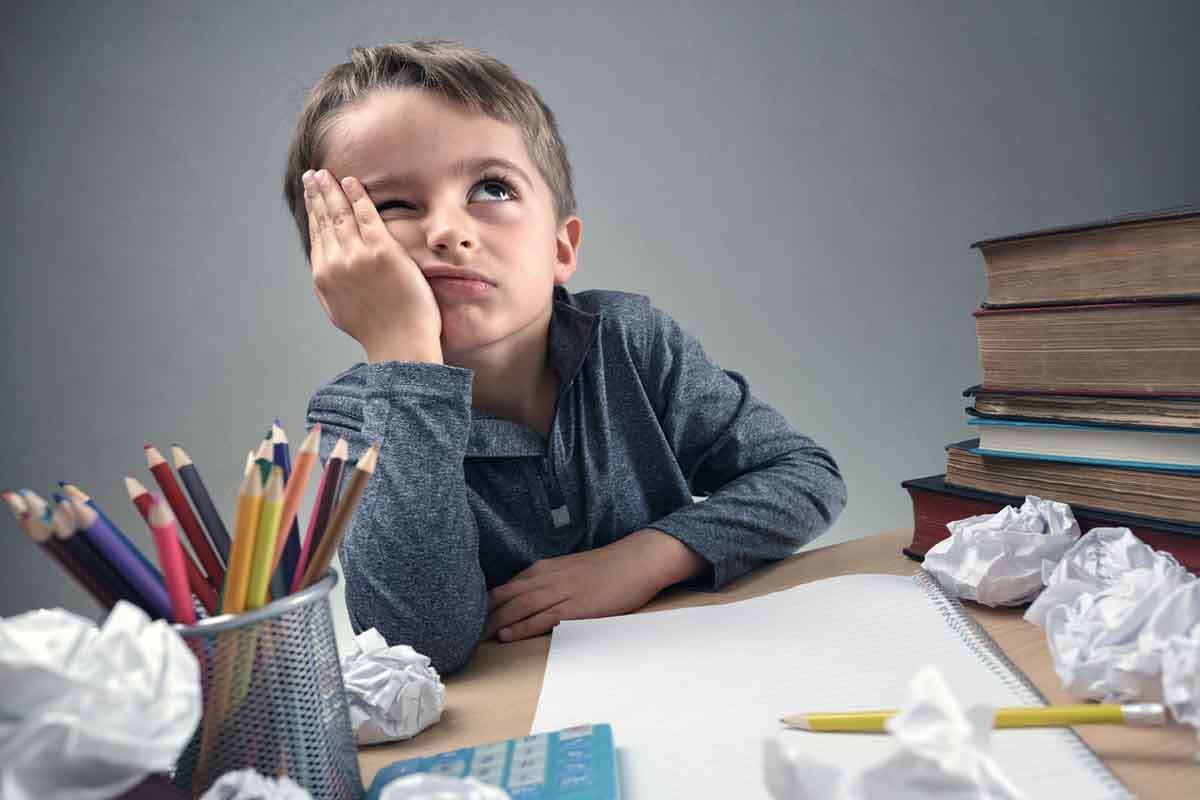 What about 'redshirt' school for boys?

Of Boys and Men: Why the Modern Male is Struggling, Why Matters, and What to Do about It by Richard V. Reeves. Brookings Institution Press, 2022, 256 pages.

Review by Scott Winship, senior fellow and director of studies in the American Enterprise Institute, published in Education Next in October 2022.

Of Boys and Men is the rare policy book with the power to jar even readers who have thought long and hard about its subject. Those readers will find much to debate between its covers, but Reeves deserves great credit for starting a public conversation around what has happened to boys and men in the modern world.

Reeves is a senior fellow at the Brookings Institution, where he studies inequality and opportunity. His previous book, Dream Hoarders, swam against the tide of populist outrage at the “top one percent” to argue that, actually, there’s a more uncomfortable inequality problem we need to discuss: that between the bottom half of Americans and those in the upper middle class, including the core audience of Dream Hoarders. Of Boys and Men again finds Reeves taking seriously an unfashionable form of inequality: the widening socioeconomic disparities and trends running against boys and men and in favor of girls and women.

Boys and Young Men Have Fallen behind in School

I worked at the Brookings Institution a decade ago, just across the hall from Reeves. (I should disclose that Reeves is a great friend who once goaded me into singing at a piano bar.) At Brookings, it seemed as if not a day went by without someone asking, “What’s wrong with men?” The issue has been on my radar for some time. Nevertheless, I was taken aback by the striking educational gaps that Reeves presents in his new book. 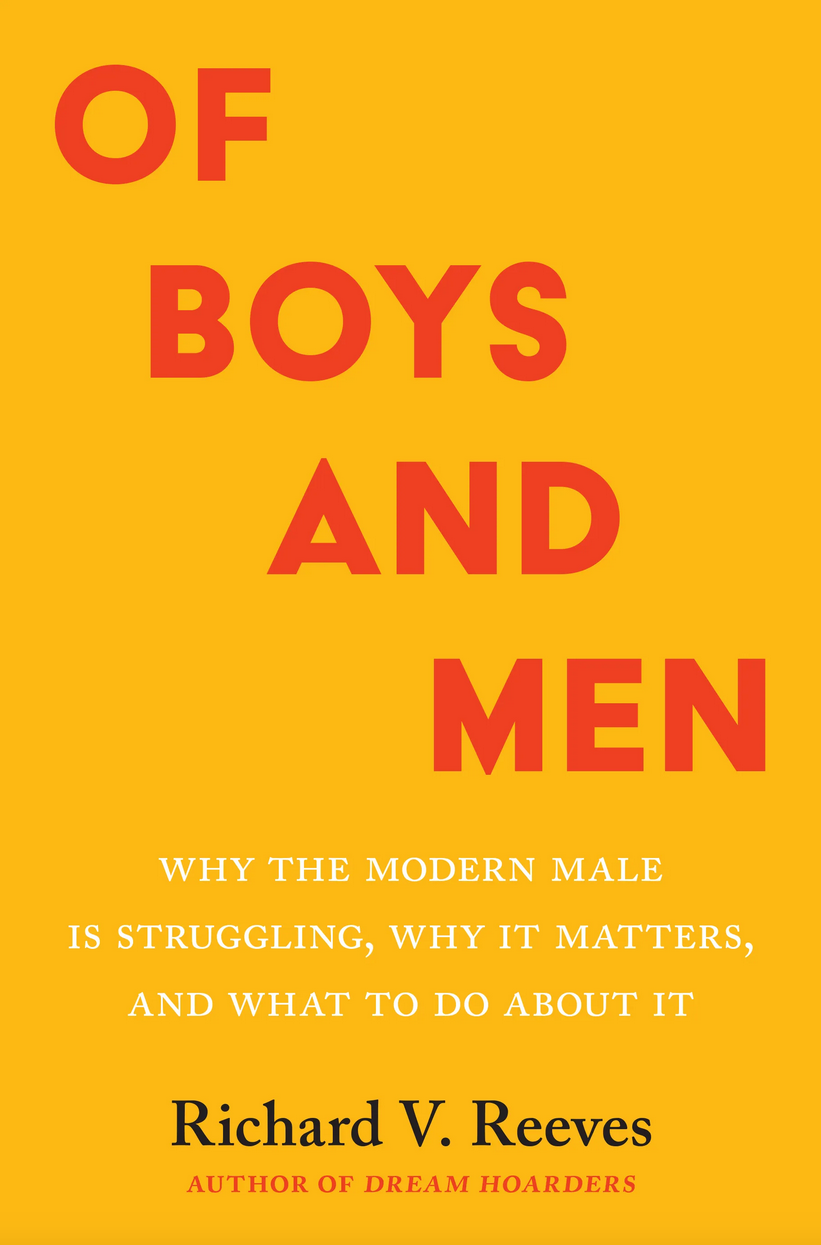 Start with little kids. Along one broad measure of “school readiness,” boys entering kindergarten are about as far behind girls as Black children are relative to white children. Language-arts test-score gaps in primary and secondary school strongly favor girls, while math gaps (sometimes favoring boys) are relatively small. Nationally, two thirds of 9th-graders in the top 10 percent of the grade-point-average distribution are girls, while two thirds in the bottom 10 percent are boys. Reeves cites Chicago numbers showing that this male-female GPA gap is as large as the GPA gap between the richest and poorest neighborhoods in the city.

College enrollment and graduation rates are correspondingly lower for men. The problem has apparently become large enough that private institutions of higher education have quietly adopted affirmative action in admissions to ease standards for male applicants.

Reeves argues that these sex-difference gaps are essentially the result of biological differences crashing into an educational system whose design favors the developmental profile of girls. This unintentional bias only became consequential once more professional opportunities opened up for women. Men’s and women’s brains, broadly speaking, end up in the same place, but girls and young women get there sooner, and, in the meantime, boys’ brain chemicals do their best to gum up the works.

To address these educational disparities, Reeves offers a number of worthy proposals, including increasing the supply of male teachers. But his headline idea is his most radical: to “redshirt” boys at the start of school, so they begin a year later than girls by default. (Actually, it is even more radical than that: he favors universal pre-K and giving boys an additional year of it while girls enter kindergarten. That would leave boys with an additional year of schooling by the time they graduate from high school.) This reform would, of course, be a huge departure from historical education policy, but Reeves’s discussion of sex disparities leaves me hoping that a few school districts—or, more likely, private schools—will give it a try. In contrast, Reeves objects to single-sex classrooms and schools because the evidence in their favor seems weak—a thinly argued rejection, given that he acknowledges that we don’t know whether redshirting would work.

Men Have Fallen behind at Work

In addition to these large educational disparities, and perhaps related to them, women have gained ground on men in economic terms. The wage gap between men and women has closed considerably, for instance. (In Reeves’s analysis of the remaining gap, he implicates occupational preferences and work demands unfriendly to caregivers, offering as clear a summary of the evidence as I have seen.)

Like many observers, Reeves paints a picture of an economy that has failed men. Their labor force participation has fallen sharply, for instance. However, Reeves’s contention that the drop is due to “a one-two punch, of automation and free trade” is undermined by his subsequent concession that no academic consensus exists on these points. Reeves also writes that the “median real hourly wage for men peaked sometime in the 1970s and has been falling since.” But analysts ranging from the liberal Economic Policy Institute to, well, me, have found that, after a lengthy period of decline, men’s pay has rebounded back to historic highs over the past 30 years.

The fact that wages have risen (or at least not fallen) raises the issue of whether men, over time, are doing worse in absolute terms (rather than just relative to women). For instance, as of 2019, high school and college graduation rates among men ages 25 to 29 were higher than ever before. It is just that women have pulled ahead dramatically after starting behind.

Men are clearly less likely to be working than in the past, but this trend has occurred through the boom years of the mid-twentieth century, the following decades when men’s wages were declining, and over the past 30 years of rebounding male wages. That roughly three quarters of the long-run decline involved men who tell government surveyors they do not want a job suggests that at least some of this trend need not worry us. Affluence—including the expanded work opportunities it provided married women—has likely given men more freedom to lean out. At the same time, many men have replaced working in jobs traditionally held by men with dependence on disability benefits.

Reeves recommends a concerted public-private push to recruit more men into what he calls “HEAL” occupations—jobs in health, education, administration, and literacy that are often coded as feminine. He has in mind the successful philanthropic and government efforts made getting more women into “STEM” positions. Successfully increasing the number of men in HEAL jobs would not only help male workers, but it would also likely benefit boys in school (who might learn better from male teachers), men in therapy, and other male consumers of services dominated by women.

Men Have Fallen behind in... Life

Absolute gains or losses aside, Reeves is right that the relative balance of power between men and women has shifted. He argues that the result has left men without purpose or well-defined roles as fathers. Having filled a one-dimensional provider role for millennia, men are now existentially adrift, without purpose or identity.

His analysis here is, I think, one of the more important in the book. Until 50 years ago, before women were able to expect they could have a fulfilling professional life, they had minimal incentive to pursue educational success. But patriarchy gave men incentives to follow a script—do decently in school and get a stable job so as to be able to raise a family. Now, with many women serving both the main caregiver role and an important provider role, the incentives may be reversing. Today, girls and young women have a vocational script to structure their choices, while boys and men may be unmotivated to adhere to the old script that presumed they would shoulder the primary-breadwinner responsibilities.

In my view, this problem has been grossly underappreciated and undertheorized. But I suspect it is not primarily about men falling behind educationally or economically in absolute terms or relative to women. On a plethora of indicators, Americans have seen depletions in the strength of their relationships and their connection to institutions. Why this should have hurt men more than women is unclear, but Reeves’s discussion of the fragility of the male identity offers a great place for future scholars to start.

While he identifies a number of ways in which men seem lost —their identities are less multifaceted than those of women, they have fewer friends, they succumb to deaths of despair at much higher rates— Reeves focuses specifically on rebuilding their roles as fathers. Conservatives and liberals alike can agree on the importance of dads, but most conservatives will find the direction Reeves takes in this regard curious.

Substack post from Reeves conveys well the stance Of Boys and Men takes toward the demise of the two-parent family. After noting that women are increasingly primary breadwinners (often because they are single parents), he writes:

About 40% of births in the U.S. now take place outside of marriage, up from 11% in 1970. (A particularly striking trend is the decline in “shotgun” marriages). From a feminist perspective, which to be clear is my perspective, these are marvelous developments. But we should also ask: what do they mean for men?

The biggest shortcoming of the book, in my view, is its neglect of the question of what trends in marriage mean for boys and their development. What if the major part of the story of girls overtaking boys in school, for instance, is about the disproportionate effect on boys of rising father absence? This is a hypothesis unexplored in Of Boys and Men. Particularly given the attention Reeves devotes to the problems of poor and Black boys and men, the omission stands out, because single parenthood is more common in those communities.

The most intuitive way to ensure that more fathers are engaged with kids is to strengthen marriage. Nevertheless, Reeves takes as given that we as a society cannot alter the decline of marriage as an institution. I am dubious that we can revive the institution of fatherhood without doing so.

The policies Reeves proposes—more paid paternity leave, child-support reforms, and more family-friendly workplaces and career ladders—seem inadequate to me for shoring up men’s social roles and identities, as fathers or generally. However, the real value of Reeves’s book lies elsewhere. Sixty years after the publication of The Feminine Mystique, Of Boys and Men should similarly inspire conversations about a “problem that has no name” that is much like Betty Friedan’s in its ineffability and importance.